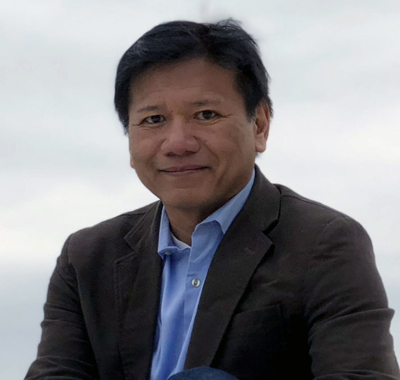 By Manav Singh and Sabir Aden, JCamp Class of 2021

Bobby Caina Calvan is no stranger to the tumult of journalism.

Whether it’s covering the collapse of a Miami condo building that killed nearly 100 people or covering the war in Iraq, Calvan has lived and breathed human tragedy and struggle during more than two decades of his career.

Born in the Philippines, Calvan moved to Hawaii with his family when he was 4. He grew up on a dairy farm in Waimanalo, Hawaii and began to develop his love of the written word in middle school. There, he put together a newspaper for a class project and the affair began to blossom. Then, at Wallace Rider Farrington High School in Honolulu, he said he got bored of his Spanish class and dropped it for a news writing class.

“We produced a newspaper like once a month, and it was called The Governor. And eventually my senior year, I was editor-in-chief,” he said. “I knew then that I’ve always wanted to be a journalist.”

He moved across an ocean and the country to attend New York University — the first of many flights that would take him further than he ever imagined while growing up on the farm.

“It was part of this mission of exploration,” he said. “And journalism encapsulates that perfectly because that’s what we do. We explore the world.”

But the adventure was expensive. So Calvan returned west to finish his degree at the University of California at Berkeley. His parents thought those legal studies classes would lead to a career in the courtroom. But he held onto his long suffering love for journalism.

While at Berkeley, Calvan paid his rent by writing for El Cerrito Journal, which covered communities near the university campus. He spent many years at small California newspapers until he was offered a position at the Detroit Free Press. From there, his career took off as he criss-crossed the nation reporting for the Sacramento Bee, the Seattle Times, and the Boston Globe’s Washington bureau, where he covered Congress.

“When I walked out after a late night, I’d always turn around, take my iPhone, and take a picture of the flag whipping in the breeze above the Capitol dome,” Calvan said. “And I used to always think that, man, my parents must be so proud of me right now. To think that their son is covering one of the most powerful or most important institutions of power in the world.”

Calvan’s involvement with AAJA grew along with his career. He served on the national board and led the MediaWatch committee, which holds news organizations accountable on issues of fairness and the accurate representation of Asian Americans and Pacific Islanders.
All the while he has been working with AAJA members to try to resolve one of journalism’s most pressing and perplexing dynamics.

“If our industry doesn’t reflect our communities, they’re not going to do a very good job covering those communities,” he said.

Calvan now works for the Associated Press, where he has covered both Montana and Florida news. Soon, he will move to New York City, returning to the city where he began his adventure more than three decades earlier.