The six-day training camp brings together culturally diverse students from across the nation to learn from veteran journalists and leading media executives. JCamp participants will receive hands-on training and produce multiplatform news packages for the program’s news site, JCamp Live. Since 2001, over 700 high school students have graduated from JCamp. Every year, AAJA receives hundreds of applications from all regions of the country.

Changing the Face of Media

JCamp was started in 2001 as a response to the industry’s diversity crisis. The program is designed to help assure excellence in the profession for decades to come and to confront the lack of diversity in journalism, not just in race, but also in matters of religious background, political background and other factors. Since the program began, hundreds of the nation’s most talented teenagers have graduated. Early surveys of JCamp students indicated that approximately 75% went on to pursue journalism in college. With a multicultural team, media get more accurate perspectives on stories of Latinos, African Americans, Asian American and Pacific Islanders, and Middle Eastern Americans.

With a diverse team, readers and viewers get different views on city governments, local communities, business, entertainment and recreation, science and medicine, and national and international issues. 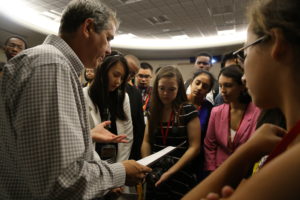 Selected students demonstrate a keen interest in broadcasting, newspaper, magazine, photojournalism or online media. This program is not limited to Asian American students, but to all high school freshmen, sophomores, juniors, and seniors. There is no fee to apply and all costs are covered  — including airfare, lodging and meals. Students stay in university housing during the camp week.

The Value of Cross-Cultural Communication Skills
This heightened awareness comes from interactions with peers and mentors from completely different environments and backgrounds, along with training in the basics of effective interpersonal skills and the importance of creating inclusive environments as colleagues and journalists.

The Importance of Diversity in the Newsroom and in Media Coverage
JCamp fosters an appreciation for diverse viewpoints and reporting in diverse communities. Students also learn why it is important that media outlets reflect the communities they cover.

Strong Ethics in Journalism Practice
Students gain an understanding of the universal ethics of good journalism and the responsibilities of the media to cover communities with sensitivity and high standards.

The Value of Networking & Career Mapping
Regardless of a student’s eventual career choice, each will go home with an understanding of how to pursue a profession and an appreciation for the importance of networking and building relationships with mentors and peers

Julia M. Chan (’03) is a Producer at CNN Special Projects where she develops and crafts feature content for the network’s portfolio of global linear and digital platforms. She serves on AAJA’s Governing Board and chairs the AAJA Awards committee. Chan is an alumna of the University of Michigan and the University of California Berkeley Graduate School of Journalism.

Arelis R. Hernández is a Texas-based national correspondent for the Washington Post covering the US-Mexico border, immigration and other Lone Star stories. She has covered natural and human disasters, breaking news and politics both domestically and internationally for the Post since 2014. She previously covered crime for the Orlando Sentinel and graduated from the University of Maryland. She is also co-director of the Asian American Journalists Association’s high school journalism program and has volunteered since 2013.

Ben Bartenstein ('11) is a Middle East correspondent for Bloomberg News. A native of rural Wisconsin, he's reported across five continents with assignments in the UAE, the US, Peru, Morocco and Spain. Bartenstein graduated with a degree in International Studies from Macalester College in St. Paul, Minnesota.

Timmy Huynh ('05) is an operations manager and photo editor at the Wall Street Journal. He earned a graduate degree from the Missouri School of Journalism and currently lives in New York City with his wife Paige.

High school freshmen, sophomores and juniors are encouraged to apply. Students selected for the program have all costs covered including airfare, campus housing and meals.

AAJA welcomes donations to its student and professional programs throughout the year. Your donation to the JCamp program will go a long way toward helping the students produce quality work and gain valuable newsroom experience!

From the JCamp archives

The timeline for JCamp 2023 will be the week of July 15-21. We are returning to the nation’s capital, Washington, D.C. this coming summer.

The JCamp 2023 program will continue to face the unique challenges of balancing public and personal health concerns in the pandemic era with our in-person programming. In light of the uncertainty, JCamp 2023 staff will closely monitor public health guidelines and follow all rules outlined by our host site. We will also be requiring proof of vaccination to attend the program.

Will you accept late applications or letters of recommendation?

No. We will close applications on March 17, 2023. At that time, no other applications or letters of recommendation will be accepted.

How many students are accepted each year?

With continuing uncertainty about pandemic risks and other considerations, we are planning on accepting around 25-30 students for 2023.

What are you looking for in the application?

We are looking for your genuine self. We accept students of all backgrounds from the biggest coastal cities to Midwestern cul-de-sac to the remotest parishes and ranches of the United States. If you love or like journalism and communications, tell us your story and/or why you want to apply to this journalism program specifically.

How much will I have to pay to attend the program if I am accepted?

JCamp is free for everyone accepted. All fares are paid for! (Travel, housing, program costs, etc).

Where will I be staying during the program?

Traditionally, students share a college dorm room with one other accepted JCamp student. We are working with our host partner to develop a housing strategy that prioritizes health and well-being as part of our pandemic precautions. Additional health considerations may be necessary.

I'm a current senior. Can I apply for JCamp?

JCamp is a program for current high school freshmen, sophomores and juniors. Priority is given to second- and third- year students but exceptional freshmen are encouraged to apply. If you are a high school senior, look out for more information about AAJA’s VOICES college program this summer.

Are applications evaluated on a rolling basis?