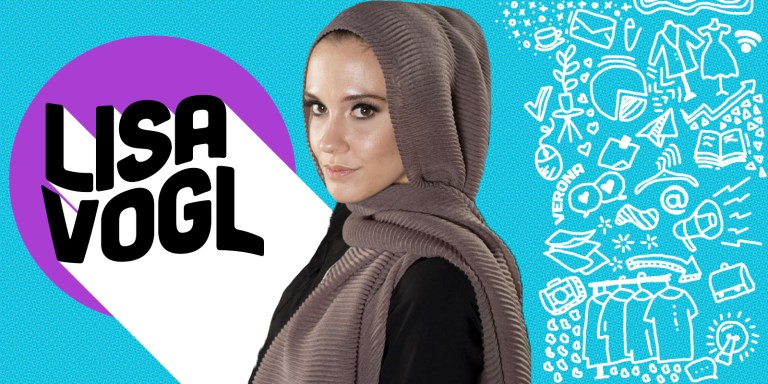 This Muslim.co feature is in partnership with Asian American Journalist Associations’ Muslim American Task Force  with the mission to uplift Muslim community members.

Lisa Vogl is on the forefront of changing the game for Muslims. She is the co-founder of Verona Collection – the first modest clothing line to be sold at Macy’s and ASOS – is an award winning fashion photographer, and a mother to two boys.

Vogl is a survivor of domestic violence and continually uses her platform to empower others to speak out and call attention to these issues that are all too often not discussed in many communities.

What inspired you to launch Verona Collection?

There are two main reasons why myself and Alaa Ammuss started Verona Collection. One, was out of pure need. We just like many of the millions of Muslims in America and across Europe felt it was hard to find modest, affordable, yet fashionable clothing. Shopping for new outfits always seemed like a dreadful task. The clothing that was available either seemed to not fit my American Western style or it was extremely overpriced. The second reason and the reason that is near and dear to my heart is I want Verona to give women like myself in America the confidence to be proud of their Muslim identity and even more proud to wear their hijab … All of this negativity directed towards muslimahs staying strong in who we are may not always be the easiest task. Meanwhile, another struggle we face is constantly bombarded with images of women wearing next to nothing photo-shopped head to toe giving women a false sense of what it means to be beautiful. So I want to send a strong message that you can still be fashionable, chic and feel beautiful but you don’t have to uncover to do so.

Has your Muslim identity informed all the different projects that you do?

How has coronavirus (Covid-19) impacted your work? What does this mean for the future of Verona Collection?

We have a lot planned for Verona. When we launched with Macy’s and then soon after with ASOS our resources and manpower were tied up with the department stores. However, over the last 9 months we have been focusing on a relaunch coming out with lots of new designs and a fresh marketing perspective.

Due to Covid-19 our relaunch has been delayed. I don’t know the exact date when we will release our new items but I’m hoping within the next few months. I felt a bit defeated when it happened, but that’s a part of business. You have to roll with the punches and sometimes you have to learn to take a few steps back in order to move forward. And that’s what we’ve done.

You have been brave and courageous to share your story of domestic abuse. Thank you so much for sharing this story. What made you come forward?

Thank you. I only pray that speaking out helps others. In 2017 and 2018 I was in many major articles as I was being interviewed left, right, and center due to our partnership with Macy’s. And as a result of my interviews I gained a small platform. Many looked towards me as a business woman who had it all together but nothing was further from the truth.

I had escaped an abusive husband in 2015 and finally divorced in 2017. However, at that time my ex was always harassing me and threatening me. I couldn’t go a day without experiencing anxiety or fear of what he would do next. Although he was extremely physically abusive in our marriage it was the mental abuse that I was traumatized over. He was no longer able to physically harm me so he did everything he could to make my life miserable. So I felt it wasn’t just my right but my responsibility to come forward with abuse that I had faced.

I realized that women who were suffering abuse needed to know that they were not alone. That if I was able to leave and make it they could too. When I went public with my story I received thousands of messages mostly from women within our community. I still to this day receive messages daily that I’m often not able to keep up with but do my very best.

We need to be better. We must be better. As a result of the way it’s handled women lose their life. Women are often told to have Sabr in the face of oppression. The perpetrator is told to pray more and read more Quran.

We of course have exceptions and there are many Imams who speak out against abuse. I’ve always applauded Imam Khalid Latif and Sheikh Omar Suleiman who take a public stance against domestic violence. This is what our religion teaches us.

However we don’t need Islam to tell us speaking out against injustice is the right thing to do. We really don’t. We just need to be human. But our religion does teach that. Prophet Muhammad (PBUH) taught us when faced with abuse or witnessing it we must try to change it, and if we can’t change it with our hand we must change it with our tongue (speaking out against it), and if we can’t do either at least hate it in your heart. But our Prophet (PBUH) said this is the weakest of Iman. So it’s clear what our religion teaches us, we must never tell a woman who is faced with abuse to have patience. This is one for the most backward mentalities I have seen and unfortunately it’s prevalent within our community.

What more do you think can be done about domestic abuse in Muslim communities? Do you think it’s a taboo subject?

I believe we must all learn to speak out against abuse. The more we collectively speak out it will start to become less of a taboo topic. Pretending abuse is not an issue in our community only makes the problem worse. We also have this idea that the victim must feel shame there for must stay quiet. We need to reject this idea. The perpetrator needs to feel the shame, not the victim.

What work do you do to help victims of sexual assault/domestic violence?

I’ve raised money to build women shelters for both Penny Appeal USA and ICNA Relief. I serve on the advisory board of ICNA Relief and help them whenever they call upon me. I try my best to help individuals when I’m able to and last but not least I speak out.

I use my platforms to educate people on the effects of abuse and how we must take a stance against it. There is not a day that goes by that I am not working to fight domestic violence at least in some capacity. I do as much as I can and pray it’s helping.

Yes, I think it’s important to note that abuse happens to men as well. 1 and 9 men have suffered abuse and we don’t speak about it as much, me included. I need to make a conscious effort to address this more.

We also need to understand that abuse is not just physical. Mental abuse is  often way more traumatic and can sometimes take longer to heal from then physical abuse.

And lastly, one myth I’d like to break is when a victim leaves an abuser she/he is “breaking up a family.” A single parent home that is healthy full of peace and laughter is way more beneficial for the children than one with two parents and abuse. This is not my opinion, this is what studies have proved to be true.

Henry Fuhrmann dies at 65; tenacious editor and our dear friend